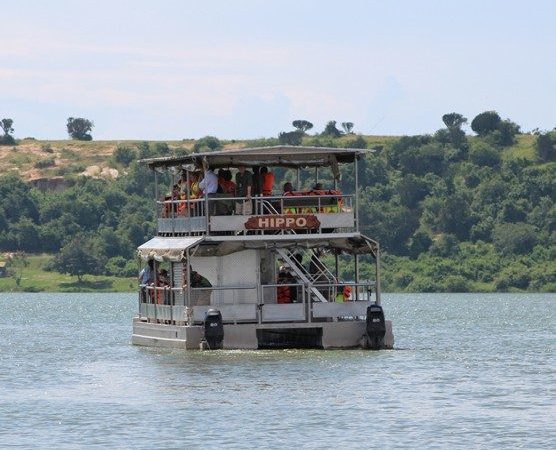 Chimpanzee trekking in queen Elizabeth national park is carried out in the Kyambura gorge within the park also known as the valley of apes because a number of primates that can be seen like the silver monkey, black and white colobus monkeys, Dent’s monkey, grey-cheeked mangabey,  the red tailed monkey, silver monkey among other primate species.

Chimpanzee trekking in the kyambura gorge involves tourists moving through the forest to the habituated chimpanzee troops where you will get the opportunity to spend time with the primates understanding their behaviour in the wild through observing their feeding patterns and their diet which mainly consists of fruits and a number of edible leaves, their grooming patterns which is usually done by the adult females of a particular chimpanzee troop.

You will also have the opportunity to see a number of attractions during the activity like a number of bird species like White-winged Warbler, Long-toed Lapwing Spur-winged Geese, Little Egret, African Jacana, Papyrus Gonolek Yellow Wagtail, African Open bill, Yellow-billed Stork Common Snipe, Black-headed Gonolek African Marsh Harrier, Squacco Heron Black-headed Heron among other bird species which will make the activity one of the rewarding  activities in queen Elizabeth national park.

The lion tracking experience is among the most interesting activities in Queen Elizabeth national park which will ensure you will have memorable experiences during your Uganda safaris. The activity in Queen Elizabeth national park involves visitors accompanying a team of researchers to track the lions with the radio collars which will enable tourists to easily get to a given lion pride which they will observe to understand more about their behavior in the wild. At the end of your tracking experience in the park, you will get to differentiate the female from the males, you will be able to see how the lions co-exist with one another among other interesting features about the carnivores in the park.

Birding is another activity in Queen Elizabeth national park that tourists can participate in to have a memorable Rwanda safari. It should be noted that in the park, the park is a home to over 400 bird species that can be seen along the water sources like the Kazinga channel, you can also see a number of bird species in the kyambura gorge among other areas in the park.

The boat cruise in Queen Elizabeth national park is done along the Kazinga channel which connects Lake George to Lake Edward and during the activity, you will have rewarding views and experience during your activity in Queen Elizabeth national park. After a number of challenging activities in the park, you can participate in the boat cruise where you will get to relax where you will have the chance to see a number of bird species including the GriffonVulture, Lappet-faced Vulture, Brown Snake Eagle, Wahlberg’s Eagle, Bateleur, Long-crested Eagle, you will also watch the sunset as you experience the cool breeze from the lakes, you will also see the elephants quenching their thirst from the Kazinga channel, hippos taking dips in the water among other interesting attractions within the park among other interesting features within the park.

Game drives are some of the rewarding activities in Queen Elizabeth national park that tourists can participate in for memorable experiences within the park. during the morning game drives in the park, you will get to see a number of early risers like the elephants, zebras, a number of buffalos, impalas, Uganda kobs among other herbivores within the park along the Kazinga channel where they can be seen quenching their thirst from the and during the evening game drives, you will see a number of nocturnal animals within the park as they try to catch prey for dinner and among the notable nocturnal animals that can be seen in the park include; the lions, the hyenas, the leopards can be seen as they catch preys like the  Uganda kobs, the impalas among other antelope species.

You can also get the chance to visit the different communities around Queen Elizabeth National Park, where you will have amazing time learning more about the cultures of the people of Uganda, for example, the Bakonzo through their cultural dances, local dishes, you will also be taught how to harvest honey, you can also visit the salt mining villages like Katwe where you will be taught b the locals how to mine salt and take you through the entire salt mining process for a memorable Uganda safari.