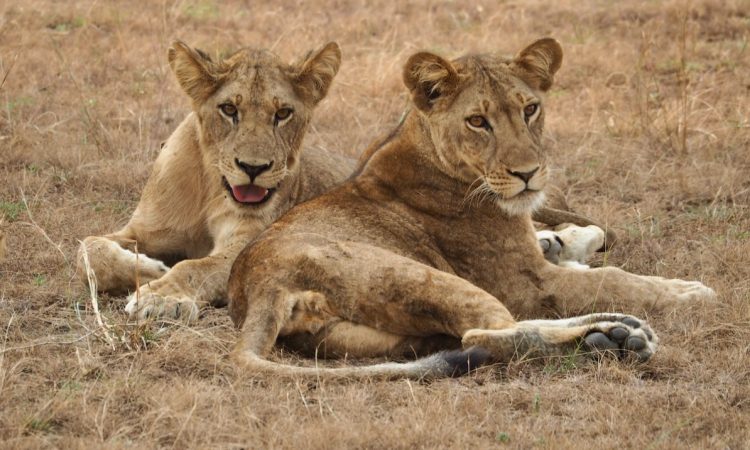 Queen Elizabeth national park in Uganda is the second largest national park in the country spanning over a radius of 1,978 square kilometres. The national park is blessed with over 651 species of birds and more than 95 mammal species. Some of the commonly wildlife species in the park include; Uganda Kobs, impala, buffalos, waterbucks, savannah elephants, giraffes, zebra, hippos and crocodiles among others.

Lion tracking in Queen is conducted in the northern sector of the national park in Kasenyi Plains. This area is a popular hot spot for game drives in the park because it hosts a large concentration of wildlife species.

The lion tracking experiential tour in Queen Elizabeth national park is a very exciting and educative activity; not only do you get to see lions in the wild, but you will also get to learn a lot about the species, their feeding habits and also how important it is for us to conserve lions for future generations.

Lion tracking in Queen Elizabeth national park in Uganda is run by the Uganda Carnivore Program in partnership with Uganda Wildlife Authority. It started out as a research program and was later opened to the public. The main objective of the Uganda Carnivore Program is to carryout monitoring, research and conservation of predator species in Uganda which apart from lions also includes hyenas and leopards.

Lion tracking in Queen is only offered twice a day starting at 8am in the morning and in the afternoon hours. The activity is takes between two to three hours.

How is Lion Tracking conducted in Queen Elizabeth

Along with a team of expert researchers from the Uganda Carnivore Program and a ranger from UWA, you will get to radio-collar certain lions and leopards in the park in order to monitor their movements, territories, risky encounters, and, particularly, their incursions into conflict areas/territories where they face the danger of meeting up with people and their livestock.

Make sure that as you search for/track lions in the park, you do checkup the trees because these big cats tend to spend quite some time relaxing within tree tops in a bid to escape the scorching heat in the national park.

Number of People allowed to do Lion tracking in Queen Elizabeth

This activity can be done in small groups of four to six members given the fact that visitors are accompanied by a team of researchers and guide. This makes it easy for the team to be managed and your safety is assured by an UWA ranger.

Lion tracking in Queen Elizabeth national park costs USD 100 per person for both Foreign Residents and Non-Residents alike; while East African Citizens get to pay UGX 100,000 Shillings per person. Visitors are advised to making bookings for this activity at least 6 months in advance because it’s on high demand all year round.

Best Time to go for Lion Tracking in Queen National Park in Uganda.

The activity can be done anytime throughout the year and the best time is during the dry season in the months of June to September and December to February. It is during this time that game drive tracks in the national park are navigable. In addition to this, you will be able to view a variety of wildlife in Kasenyi plains such as; Cape buffalos, impala, duikers, waterbucks, impala, elephants, hyenas, leopards and so many more.

Conclusion: You can always combine lion tracking in Queen Elizabeth national park with other activities offered in the park like; a boat cruise on Kazinga Channel, guided game drive, nature walk, chimpanzee trekking in Kyambura Gorge, mongoose tracking and cultural tracking among others.

Book your safari to Queen Elizabeth national park in Uganda through a trusted tour company such as Explore Rwanda Tours and get a chance to explore one of the best savannah national parks in the ‘Pearl of Africa.’