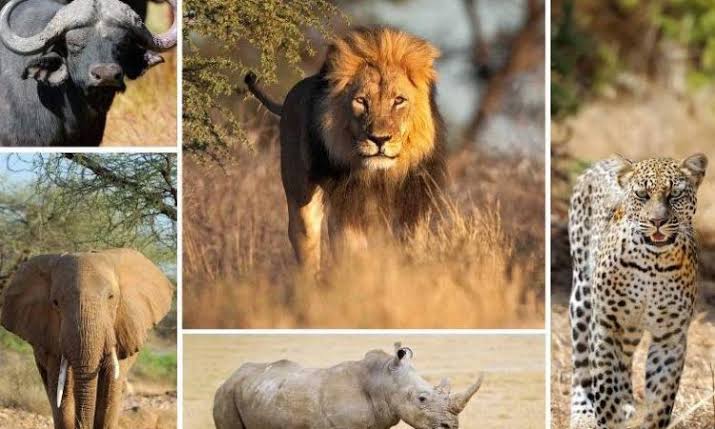 Big 5 in Akagera National Park are one of the biggest attractions in Akagera whereby travelers get to see the Lions, Elephants, Buffalos, Leopards, and Rhinos. Rwanda is truly the Land of a thousand hills. Travelers visiting this beautiful country are usually taken aback by her beauty; the stud lush green and well-terraced hills in the countryside, the dazzling blue crystal lakes such as Lake Kivu, her rivers that meander through hills and mountains, stunning national parks and her hospitable people.

Rwanda, as a country, has a lot to offer her visitors especially when it comes to tourism. There is a lot for tourists to do on a visit to any national park in the country. One of the amazing national parks for travelers to visit is, Akagera National Park; located in the eastern part of Rwanda.

Akagera National Park is the only refugee left in Rwanda for savannah wildlife in the country. The national park is also the only place in Rwanda where visitors can get to see the famous Big Five animals in their natural habitat.

The national park is home to over 8000 wildlife animals including; lions, the leopard, black eastern rhinoceros, the Cape buffalo, over 100 savannah elephants, antelope, impala, hippos, crocodiles and over 500 bird species.

Akagera national park is the biggest national park in Rwanda, covering 1,122km². The park was first established in 1934, making it one of the oldest national parks on the African continent. It was primarily gazetted as a national park to protect its unique bio-diversity of plants and animals in three major areas, which include; savannah grasslands, mountain, and marshlands.

Tourists visiting the national park can’t help but marvel at the beautiful and pristine landscape in the park, and a wide variety of wildlife species roaming in the savannah. It is hard to believe that once upon a time, a huge portion of the park and its wildlife was lost due to a continuous series of poaching activities, deforestation, and encroachment of park land to create room for farming and animal grazing. Many wildlife species became extinct in Akagera national park especially lions and rhinos. The last sighting of a black rhino in the park was recorded in 2007.

However, in the years following 1970, the management of Akagera national park decided to revive the park back to its former glory. The park successfully relocated a large number of elephants back to the park in a bid to protect and boost the diminishing population of the species. In addition to this, about 300 lions were reported to be roaming the national park, and thousands of antelopes, zebras and buffaloes thrived in the savanna.

In 1994, the Rwandan genocide saw the second demise phrase of Akagera national park. Many Rwandan refugees returned to the country and a large number of these people settled in areas within and around the national park. Much of the forests and land in the park was cleared to create land for farming and cattle grazing. A large majority of the animals in the park were hunted down as an alternative source of protein to feed the masses. A lot was lost during this period and much of Akagera national park was lost.

However, in 2009, a joint management agreement was signed between the Rwanda Development Board and African Parks, a conservation NGO. This joint venture saw the two organizations take over the management of Akagera National Park, with the establishment of the Akagera Management Board in 2010. Since then, a lot of improvements have been made in regard to the conservation of wildlife animals in the park.

In 2015, seven lions were translocated from South Africa and reintroduced into Akagera National Park. The five females and two male lions flourished in the savannah areas of the national park.  Their numbers doubled in the first year with the birth of eleven cubs. Later in 2017, two additional male lions were transferred from South Africa to Akagera, thus increasing the population of these cat species in the park.

Visitors can spot lions roaming Akagera national park while on a game drive, just make sure that your guide knows exactly where to locate the lions. The park offers its guests both day and night guided game drives, with the night game drives being the best option for visitors who wish to see nocturnal animals like lions.

The Leopards of Akagera National Park:

The leopard is one of the Big Five animals that visitors can spot during a game drive in Akagera National Park if you are keen and patient. The leopard is naturally a shy and yet deadly animal. Compared to other cat species in the wild, the leopard has relatively short legs and a long body with a large skull. Its rosette fur marked body makes it difficult for tourists to spot the animal in the wild. The leopard spends most of its time isolated from other animals in the wild, hiding in trees and behind tall grass. Leopards in Akagera national park are hard to spot especially during the day. Visitors who wish to see leopards in Akagera will have to embark on a guided night game drive.

The rhinoceros species in Akagera national park where a topic of the past with the last rhino sightings in the park recorded in 2007. Fortunately, this is not the current story in the park today. In May 2017, African Parks in conjunction with Rwanda Development Board and the Howard.G. Buffet Foundation translocated 18 black eastern rhinos from South Africa back into Akagera National Park. This transfer saw the reintroduction of rhinos in the park, and Rwanda, after a 10 year absence period of the species.

Later in June 2019, the other 5 black rhinos were translocated from the Czech Republic to Akagera national park. This translocation marked the longest in the history of translocation of rhinos from Europe to the African continent, covering a distance of 6,000 kilometers.

Today, Akagera national park boasts of over 20 rhinoceros and wildlife safari of the Big 5 animals in Akagera is not complete minus visitors seeing rhinos in the park. Day guided game drives in the park offers visitors great opportunities to spot rhinos grazing in the national park.

The African savannah elephant in Akagera:

One cannot talk about the Big Five animals without mentioning the majestic African savanna elephant. Savannah elephants are regarded as the largest and heaviest land animals in the world. These animals can weigh up to 6,048kg and can live for over 60 years. Today, there are over 100 African savannah elephants roaming Akagera national park and visitors can see these amazing wildlife animals during a game drive in the park.

Cape buffaloes are among the Big Five animals that visitors can see on a visit to Akagera national park. The Cape buffalo is known to have a bad temper and it can easily charge at predators in the sight of danger. It is for this specific reason that big game hunters long ago found great difficulty in hunting down the species and therefore ranked it among the Big Five animals. The exact number of cape buffaloes in Akagera national park is not known, but visitors traveling to the park can be well assured that you will spot a couple of buffaloes in the park.

Book with us a wildlife tour to Akagera National Park and get to enjoy an adventurous trip of the Big Five animals in this park.